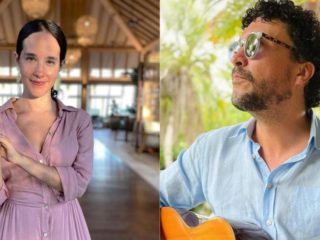 After presenting his thirteenth album “Trece” with great success and winning the Latin Grammy for his work “Compadres” with Fonseca, the singer Andrés Cepeda does not stop producing music in the studio and has just joined Ximena Sariñana to premiere the song “Lo que se va”.

“It is a subject with a modern touch that arises from several months of work between Andrés and Ximena in which they contributed and collaborated until obtaining the result that they proposed: a story of a love is fading until it reaches its end”, as explained in a Sony Music press release.

This new song, which explores different sounds, confirms Cepeda’s versatility to use samplers, drum machines, synthesizers and other tools that he does not usually use, that he had collected and kept in his cellar of musical instruments.

The theme is built with midi elements and programming, with a modern touch given by the electronic instruments used, which explore a different sound very close to Latin and romantic music, which moves between the bolero, the son and sounds of the Caribbean.

The composition of “Lo que se va” was in charge of Javier Andrés Cuello and Giovanny Andrés Fernández Manzur. The song was recorded between Mexico City, the United States and Colombia; It also featured the work of producer George Noriega at Cutting Cane Studios in Miami.

“The official video was produced by Madlove and directed by Jhonny Hendrix, in an intentionally minimalist setting, but full of color, in which the rhythm, harmony and melody of the song are constructed, piece by piece, to finally give input Ximena as the maximum element that completes and gives meaning to this musical story “, it was detailed in a statement.