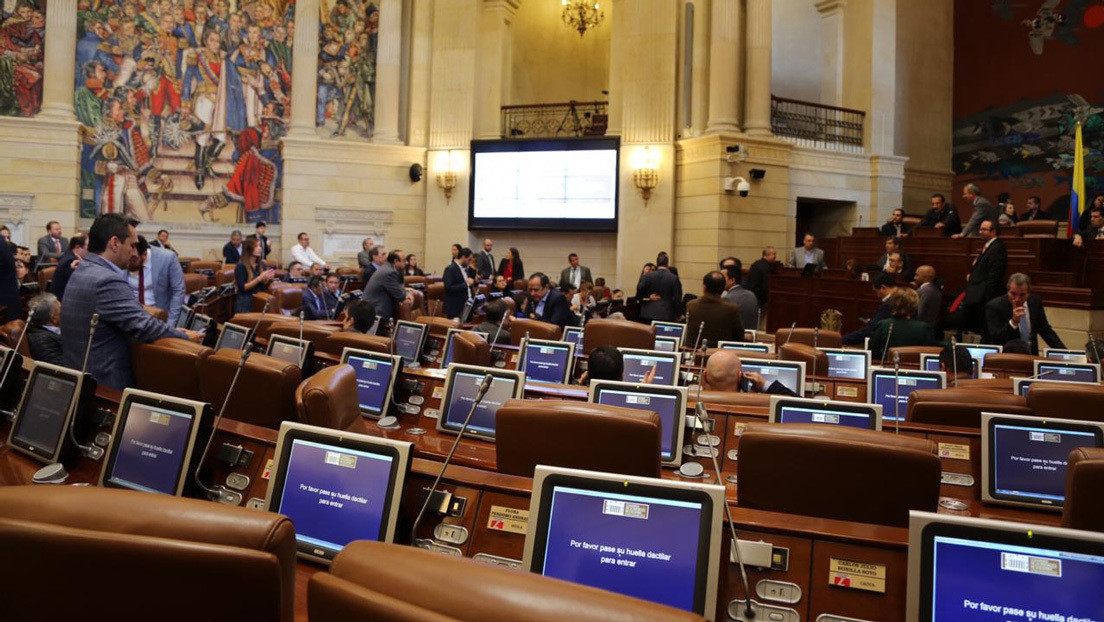 For the first time, the Colombian Congress started a debate on a bill that proposes the regulation of the coca leaf and its derivatives.

The discussion, which began this Wednesday with some outrages because it was intended to include other issues before this, is taking place in the First Committee of the Senate.

The project was presented in August 2020 by Senators Iván Marulanda, from the Alianza Verde party; and Feliciano Valencia, from the Indigenous and Social Alternative Movement (MAIS) and a Nasa indigenous leader.

This initiative “It is governed by a human rights, public health, risk and harm reduction approach”, and proposes a regulation that “distinguishes the type of product (psychoactive or cocaine, from the non-psychoactive such as coca-based foods and cosmetics), the type of use (problematic, non-problematic, scientific and pharmaceutical) and the stage in the chain of value (cultivation, transformation, distribution, commercialization and consumption) “, says a release of Alianza Verde.

Alternative to the fight against drug trafficking

In his speech before the First Committee of the Senate this Wednesday, Senator Luis Fernando Velasco, from the Liberal Party and in favor of the project, said that this initiative presents the country “a different alternative to face drug trafficking.”

#CommissionI | “Those of us who defend this project do not defend drug trafficking, on the contrary, we propose an alternative way to combat it,” said S. @velascoluisf on PL regulation sheet of thing and its derivatives. Follow the debate here 🔴 ▶ ️ https://t.co/GVhjPoZDwKpic.twitter.com/uWWyxHMOnb

“Ending the drug trafficking business implies turning drug trafficking into a bad business for the mafias, and this is achieved by regularizing the business by the State. Let’s remove it from the logic of violence“said the legislator.

His position was seconded by Senator Temístocles Ortega, from the Radical Change party, who emphasized “the current anti-drug measures have not been effective.”

Senator Roosvelt Rodríguez, from the National Unity party, indicated that the project protects the consumer since, “currently, to access the minimum dose, which is allowed, one must go to clandestine markets.”

Marulanda, who described it as “a historic day” for Congress, assured that “the project seeks for the State to buy the coca leaf at market prices from the peasants who produce it, in order to deliver it to consumers for free. (in doses regulated by doctors) “. And I add: “Is measure is more useful and economical than eradication“.

According to their criteria, in this way they would be “taking the raw material from the drug trafficking mafias and consumers from the country’s criminal micro-trafficking networks.”

#CommissionI | S. @ivanmarulanda, co-author of the PL that regulates coca leaf, reiterated: “This initiative aims to take away the raw material from producers who manufacture cocaine and export 90% of it. To buy the coca leaf crop from the peasants at market price.” pic.twitter.com/VukgEcFWdb

“The war against drug trafficking was lost in the world and that defeat has cost us Colombians dearly. Over 50 years we have left in that war a trail of death, violence, and loss of tranquility for millions of families. , of poverty, of loss of very important territories over which the State does not exercise sovereignty because they are in the hands of criminal organizations, “Marulanda underlined.

Beyond the arguments in favor, the bill met with resistance in the First Committee of the Senate. Senator María Fernanda Cabal, of the ruling Centro Democrático party, asserted that the bill should be submitted “to prior consultation with all indigenous communities.”

In the same way, he pointed out that “what is reflected in the presentation of this bill 236 is an interest in showing a failure of the state in their war on drugs. “

For her part, Esperanza Andrade Serrano, senator of the Conservative Party, asked that the project “be reviewed with a magnifying glass” and “only what is convenient for the country be approved.”

The bill presented by Marulanda and Valencia establishes that buying all the coca production would cost the State around 2.6 trillion pesos (about 710 million dollars), less than that used to eradicate this crop.

And this debate takes place precisely after this week, in a joint institutional message, the Ministers of Justice, Wilson Ruiz Orejuela, and of Defense, Diego Molano, announced Presidential Decree 380, which establishes the guidelines of the ‘Program for the eradication of illicit crops by aerial spraying ‘.

Specifically, it is about aerial spraying with glyphosate, which President Iván Duque has considered “mandatory” to eliminate illegal coca crops, which reach the 212,000 hectares in the South American country.

The measure has encountered opposition in some sectors that denounce the damage to health that this would cause, such as the Departmental Coordinator of Social, Environmental and Peasant Organizations of Caquetá (Coordosac), the National Coordinator of Coca, Poppy and Marijuana Growers (COCCAM) , some congressmen, among others.