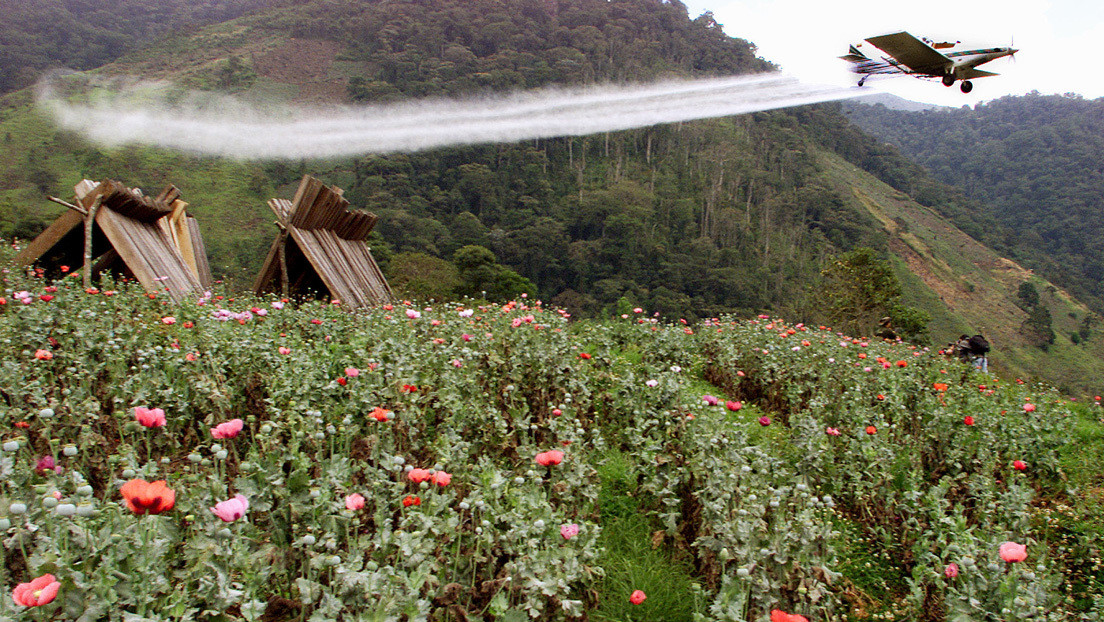 Colombia is on the verge of materializing one of the projects most vigorously defended by the Government of that country for the eradication of coca crops with herbicides, despite the judicial decisions that have cut off its path and the opposition of different sectors and international organizations that have warned about its negative impacts.

It is about aerial spraying with glyphosate, considered “mandatory” by President Iván Duque to eliminate illegal coca crops, which reach 212,000 hectares in that country. In recent days, the president issued a decree with the legal basis for the crystallization of one of his electoral promises and of his commitment to Washington.

This week, in a joint institutional message, the Ministers of Justice, Wilson Ruiz Orejuela, and of Defense, Diego Molano, announced presidential decree 380 that establishes the guidelines of the ‘Program for the eradication of illicit crops by aerial spraying’, which will not be still in place, they claimed.

Orejuela clarified that this regulatory framework “does not automatically reactivate the Program”, because it is the responsibility of the National Narcotics Council (CNE) to make the decision on the resumption of the aerial spraying interrupted in 2015 during the Government of Juan Manuel Santos, after the World Health Organization (WHO) classified it as a herbicide “probably carcinogenic to humans”.

The International Agency for Research on Cancer (IARC), part of the WHO, concluded that exposure to glyphosate could be related to the generation of non-Hodgkin’s lymphoma, which is a type of cancer of the lymphatic tissue.

On the other hand, the Constitutional Court determined in judgments T236, of 2017, and in Auto 387, of 2019, a series of health and environmental requirements that should be met to resume this method, which had been practiced in Colombia since the 1980s. Although as of 2017 the activity was suspended, it would be up to the Government to comply with the demands to resume it with the approval of the CNE.

“The enemy is illicit crops”

The Defense Minister asserted that the objective of this measure is “one more step” to “combat drug trafficking that destroys natural ecosystems and is the main generator of violence in the country.”

“All of Colombia must have absolute tranquility“Molano asked, and said that this determination seeks to protect the environment and the health of the peasants.

Faced with possible criticism for this announcement, he stated: “The enemy is illicit crops, every minute that passes generates more violence.”

In the same way, he recalled that the Executive’s objective is to reduce the total number of hectares of coca with the combination of various methods, including the 130,000 hectares that are expected to be eradicated manually this year.

Who will make the decision?

The Government affirmed that Decree 380 joins “other actions to combat illicit crops”, which include voluntary substitution and manual eradication. The latter has been criticized by human rights organizations because it puts the lives of civilians and members of the security forces at risk in the presence of antipersonnel mines and attacks by armed groups.

Although the Executive cannot make the unilateral determination to reactivate the spraying, the decision, according to the Court, remains in the hands of the CNE, which is indicated to be composed of a majority similar to the president.

The text also explains that adverse health effects and complaints will be dealt with by a series of agencies other than those who run the program, such as the Health Service Provider Institutions (IPS), the National Environmental Licensing Authority. (ANLA), the Colombian Agricultural Institute (ICA) and the National Housing Fund.

What does the decree include?

If the aerial spraying with the herbicide is approved, the following aspects will be taken into account:

Colombia, the US and drugs

As a background curtain for this decision there are alarming figures that have been sustained over time. Colombia produces 70% of the cocaine that is consumed in the worldTherefore, President Duque has reiterated his commitment to the United States, the main destination for Colombian illicit substances, in the “fight against drugs.”

Bogotá has on its shoulders the promise of reducing coca crops by half by 2023, which means having less than 100,000 hectares planted. This year, the State Department certified Duque’s work in the fight against drugs and allocated 25,000 dollars for this purpose, after considering that he had complied with the established.

At the end of 2020, a mixed commission of the US House of Representatives affirmed that the ‘Plan Colombia’, signed by the South American country and the US 20 years ago, had been “a failure” in the control of production and traffic. of drugs. The text specifies that the different Colombian governments had since received $ 11.6 billion to combat drug trafficking.

Barrage of voices against

Once the announcement was made, different political actors, organizations for the defense of human and environmental rights, peasants and members of indigenous peoples resumed the debate that has taken place on other occasions about their human costs (both for health and for physical integrity). ) and the environmental damage that this budding decision would cause.

Although the solution to end the hectares of coca has been an unresolved dilemma, among the arguments of those who oppose the Government have been alternatives such as the legalization of cocaine production, compliance with the peace accords and the attention of the State of the most vulnerable population.

The departmental coordinator of environmental, social and peasant organizations of Caquetá issued a statement rejecting the measure and called for mobilizations against the fumigations. “We oppose our fields being poisoned“is stated in the text.

#Reject the decree with which it is intended to resume aerial spraying with glyphosate. We oppose the poisoning of our fields. #Demand the comprehensive implementation of PNIS. For the defense of life and peace: Organization and mobilization against fumigation! pic.twitter.com/OQ5xwvtrlz

For its part, the National Coordinator of Coca, Poppy and Marijuana Growers described the decree as a “coup by the national government against the construction of peace with social and environmental justice.”

We reject glyphosate fumigation and we call for unitary action by those of us who defend the Final Peace Agreement.https://t.co/OUvsVGztB2#NoDecretoGlifosato#WeRejectGlyphosate#GlyphosateNevermorepic.twitter.com/Nh34TYgkNq

Senator Iván Marulanda, who brought to Congress a bill to legalize cocaine that was discussed for the first time this Wednesday, also expressed his rejection and ratified his proposal.

Also congressman Omar Restrepo wrote that 17 countries have restricted the use of the herbicide and that “125,000 lawsuits for cancer have been received in the US as a result of the use of Roundup, made on glyphosate.”

17 countries have restricted the use of the herbicide that today they want to impose again in Colombia. Not surprisingly, in the United States, 125,000 cancer lawsuits have been received as a result of the use of Roundup, made with glyphosate. There are alternatives #CocaReguladapic.twitter.com/OZxica3YkF

The senator of the Comunes party, who emerged after the peace agreement between the extinct FARC and the Colombian State, Pablo Catatumbo, said on his Twitter account that the use of the chemical ignores “the route of voluntary substitution of crops” that has as “axis central “to solve the needs of farming communities to get them out of illicit economies.”

#ElGlifosatoEs the ignorance of the route of voluntary substitution of crops where the central axis is to solve the needs of the cultivating communities to get them out of the illicit economies. Affecting the construction of Peace. #NoLesDaPenapic.twitter.com/eaO7cTuKKS

Already in March of this year a group of 180 academics had written a paper where they asked the US President, Joe Biden, not to support aerial spraying with the herbicide as his predecessor, Donald Trump, had done, and that the Government of that country rethink the approach of supporting the South American country in the fight against drugs , having as priority the issue of public health and rural development, as established in the peace accords.