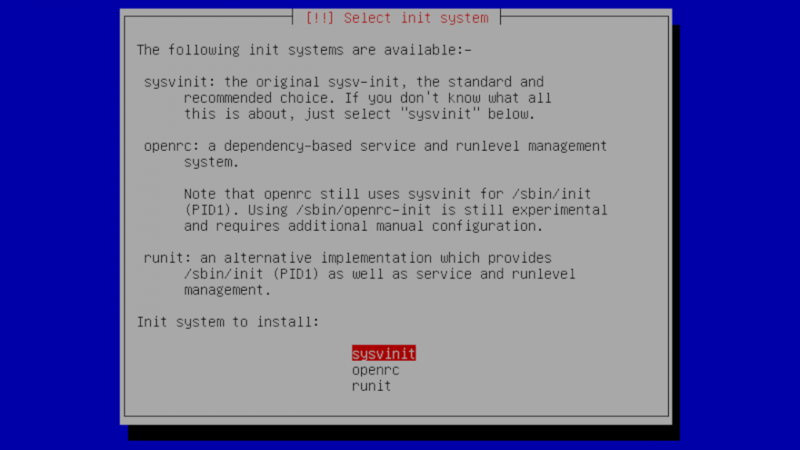 With “Chimaera” the developers, who call themselves Veteran Unix Administrators (VUA), have completed the fourth version of the Debian GNU / Linux-based Devuan distribution. As an init system, Devuan does not use the extensive systemd framework from Lennart Poettering, but offers the user the free choice between the classic and minimal SysVinit, the init and supervisor system OpenRC based on it, or the runit, which is optimized for compact code and speed. During the installation the user can choose between these three init systems.

While SysVinit works rudimentary and starts all required processes and services with the help of Bash scripts, the OpenRC also used in Gentoo Linux simplifies these scripts and creates a dependency tree from them. Thanks to its simplicity and POSIX compatibility, OpenRC works in minimal GNU / Linux systems such as Alpine Linux – used by Docker – and even the BSDs. Finally, Runit should be compact, fast and portable and activate or deactivate services via symlinks. When developing runit, the developers borrowed a lot from the classic “daemon tools”.

Do you already know the free one iX-Newsletter? Register now and don’t miss anything every month on the publication date: heise.de/s/NY1E The next issue will be about the cover topic of the November-iX: Detect and ward off attacks in good time.

The Devuan developers have chosen the current Debian GNU / Linux version 11.1 “Bullseye” with a Linux kernel 5.10 as a template for Devuan 4.0. With meticulous effort they remove the systemd framework and replace it with SysVinit – this is how a kind of traditionally administrated Debian emerges, as it was known up to “Wheezy”. It is then relatively easy to make other init systems such as OpenRC and runit available on this basic system.

Almost all desktop environments available in the current Debian are also available under Devuan. In addition to the classic Xfce, this also includes the minimalist LXQt, the GNOME2 successor MATE, Cinnamon and even KDE. GNOME Flashback, a product of GNOME Fallback, is also available. This is the current GNOME3, but instead of the playful desktop it mimics the functionality of a GNOME2.x desktop. GNOME Flashback is shipped with Debian and Ubuntu, for example, but unlike MATE it uses GNOME 3 libraries (its development lags significantly behind) and uses GTK + 3.

Otherwise, Devuan 4.0 “Chimaera” has all the new features that have already found their way into Debian GNU / Linux 11.0 / 11.1. The installation is almost identical, but sometimes offers more choice – for example, whether you want the GNOME Flashback login screen to be presented via gdm3 or slim. Desktop environments can also be installed without the PulseAudio framework.

Devuan GNU / Linux 4.0 “Chimaera” is available now free of charge on the project page for amd64 and i386 available as (minimal) ISO image, as server image and as live desktop. The system can be installed with or without unfree firmware via the expert setting. This firmware is preinstalled on the live desktop, which is useful for initial tests. This can help owners of some Ryzen PCs with APU out of a tight spot, as without this AMD firmware they can get a black graphics screen after installation. Images for ARM CPUs like on the Raspberry Pi are not officially available, but will from the community supports.