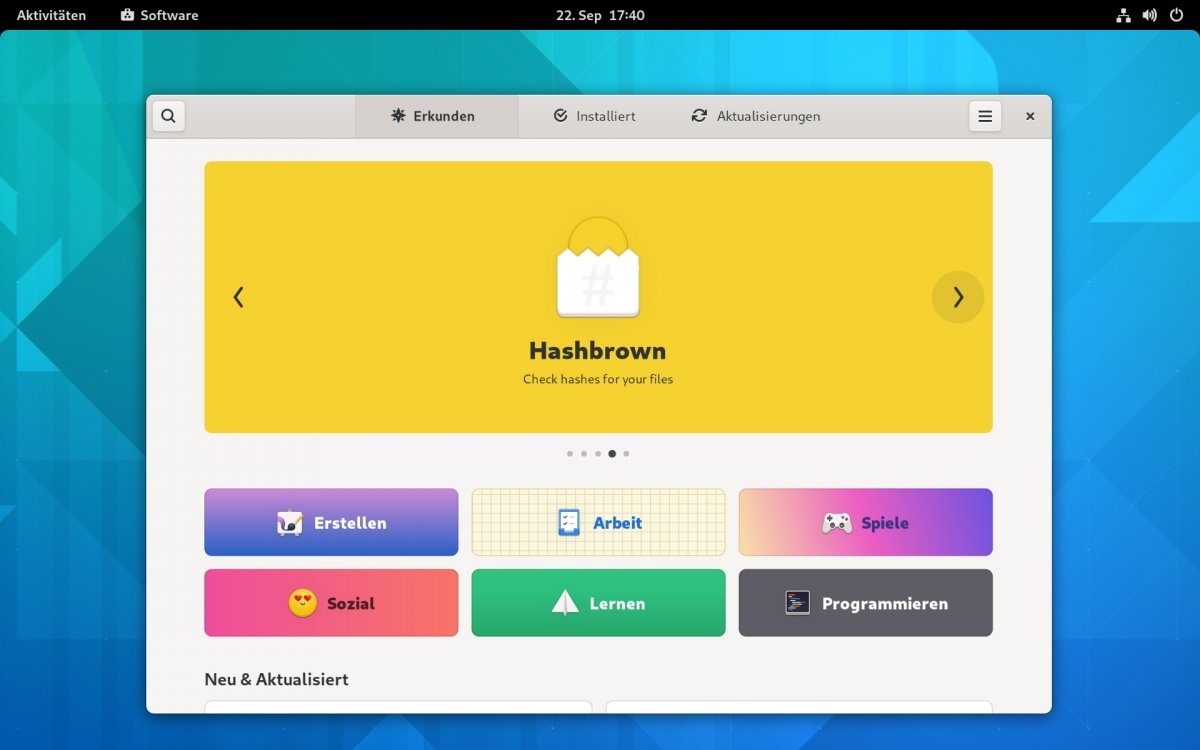 The Gnome project has released version 41 of its Linux / Unix desktop. In addition to a significantly improved settings dialog, it offers an improved calendar application, “Connections” for remote connections to other computers and improvements to the Nautilus file manager. On top of that, the developers promise more oomph through various performance improvements.

The now updated Gnome is one of the established desktop environments in the open source world. Similar to KDE, Gnome has existed for over two decades and has reinvented itself several times during this time. Today Gnome sets itself apart from most other environments: The Gnome shell as the main element of the desktop, for example, does not imitate the classic look of Windows, but arranges the desktop completely differently. The previous major version of Gnome, 40th, also brought significant visual changes compared to the previous version.

Anyone who expects significant changes from the update to Gnome 40 to Gnome 41, as with the transition from Gnome 3.38 to Gnome 40, will be disappointed. As a reminder: Gnome also changed the versioning as part of the release of Gnome 40. The major version of Gnome has always had a single version number since then; Minor releases carry a number according to the scheme XY. Version 41 of Gnome leads to the assumption that it is a version with huge innovations. In fact, version 41 corresponds more to what “40.1” would have been earlier. Still, there is some interesting news.

The configuration dialog in Gnome 41 is very much loved. Under the new menu item “Multitasking”, the developers are now collecting various settings that enable and facilitate the operation of the desktop with quick gestures and just a few clicks. The name “Multitasking” is a bit confusing – for example, the “Hot Corner” function can be activated in the dialog, which is of particular importance for everyone who does not have a status bar permanently displayed at the top of the screen. Using the “Hot Corner” function, the “Activities” view can also be displayed without a status bar by moving the mouse pointer to the upper left corner of the screen.

The function that automatically enlarges the window to half the screen width as soon as you drag it to the left or right edge of the display (“Active Screen Edges”) can also be switched on or off in the new “Multitasking” dialog. Practical: Some of the settings in the new dialog were previously only possible using “Gnome Tweaks”. The options in the “Multitasking” dialog do not depend on this external tool.

Most distributions ship Gnome to dynamically add virtual desktops as needed. If desired, the user can switch this off in the new multitasking part of the settings wizard, as well as controlling the behavior of applications if more than one display is available. In contrast, that part of the new dialog that defines the settings for switching between running applications is really about “multi-tasking”. You can choose from the view that shows all running applications on all virtual desktops or only those of the currently active one.

Anyone who uses Gnome on a device with a built-in cellular modem will be happy about the new “Cellular” dialog in the settings window. Here the user configures his mobile connections. The configuration dialog for mouse and keyboard was already available; in Gnome 41, however, this has been completely revised. The settings can now be tried out immediately using an animated graphic, such as the speed set for the mouse pointer.

A new library for nicer desktops

It is true that users of the new library “libadwaita” in Gnome 41 will not immediately notice that much. Nevertheless, it is an important innovation. Because the library, which makes its official debut as a Gnome component in Gnome 41, is the GTK-4 version of the mobile phone library from Gnome 3. It has also been used in Gnome 40 so far: It is responsible for the central optics of the Gnome desktop, i.e. for the appearance of window frames, buttons, the use of colors, the theme and more. Because GTK 4 opens up a lot more possibilities than GTK 3, the new library will offer significantly more possibilities than its predecessor.

In the course of time, most of the Gnome components will switch from the “libhandy” to them. The Gnome standard theme will also be maintained via the “libadwaita” in the future. All in all, when using the “libadwaita” it is very easy for developers to follow the Gnome Human Interface Guidelines, as well as those in Gnome 41 have received a thorough update. This makes the desktop more beautiful, more uniform, more ergonomic and faster in the medium and long term.