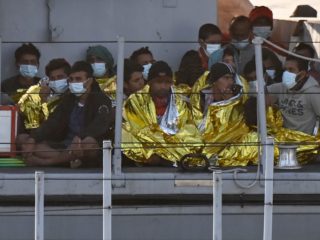 The migratory flow to Europe is waking up little by little. In the first four months of 2021, there have been 36,100 irregular arrivals to the Old Continent, which represents an increase of one third compared to the same period in 2020, characterized by the stoppage caused – mainly since March – by the mobility restrictions derived from the pandemic. According to experts, the return of boats from the Libyan coastguard along the Central Mediterranean route, and the thousands of expulsions at the border that NGOs – and even the European Parliament – have also made a fundamental contribution to this decline last year. – by the Greek police in the Aegean Sea.

Not counting the massive entry from Morocco to Ceuta (Spain) last Monday – between 8,000 and 10,000 people crossed irregularly through the Tarajal breakwater, although some 7,500 were returned shortly after forced or voluntarily, according to the Spanish Ministry of the Interior. From January to April this year, 36,100 migrants have illegally crossed the EU’s external borders, according to the latest Frontex report, which indicates that this figure represents a third more than that registered during the same period in 2020: just over 24,000 , according to the same agency, although other sources such as the International Organization for Migration (IOM) reduce it to about 17,000. Just last April, the EU’s external border control agency registered 7,800 illegal crossings, which is four times the all-time low reached that same month the previous year.

This increase does not alter, however, the modest downward trend with respect to dramatic summers such as 2016 and 2017 that experts such as Gerald Knaus, founder and president of the debate center European Stability Initiative (ESI), they have been observing on the Central Mediterranean route, especially since 2018. “For three years, the situation has been stable from a historical point of view,” explains Knaus by phone from Germany, who emphasizes that the 2014, 2015, 2016 and 2017 were “exceptional” years with hundreds of thousands, sometimes even exceeding a million, of arrivals mainly due to the war in Syria. Sara Prestiani, head of the migration and asylum program of EuroMed Rights, an umbrella organization under which 65 NGOs operate, he adds to the telephone from Rome that, although arrivals have timidly increased along this route, “Frontex does not count that the most tragic figure is those returned to Libya: 8,000 people in 2021.”

The deadly Central Mediterranean route (573 drowned in 2021, according to the UN), which connects northern Libya and Tunisia with Italy, has been the one where Frontex, together with the Canarian route, has seen the most activity during the first four months of 2021: irregular arrivals there have increased by 153% with a total of 11,602 people, mainly Tunisian and Ivorian citizens. Prestiani attributes it, in addition to good weather – a factor that has always existed and for which more boats are expected this summer – to the use of migration by the Maghreb countries and Turkey as a weapon of “blackmail” towards the European Union when negotiations loom. “More than 2,000 migrants arrived in Lampedusa just two days before a meeting of the European Council,” he illustrates. “Departures from Tunisia and Libya are increasing due to the logic of political pressure on the EU. The same has just been done by Morocco, ”he says, referring to the flood of migrants, many of them minors, that the Moroccan authorities allowed to cross into Ceuta in what analysts believe is a response to the hospitalization in Logroño of the leader of the Polisario Front. Brahim Ghali. Mariana Gkliati, researcher at the University of Leiden (Netherlands) and an expert in Frontex, acknowledges that in recent times there has been an “instrumentalization” of the refugee situation.

Along the same lines, an energetic Knaus explains that, although the number of arrivals to the EU is increasing, especially in the Central Mediterranean and in the Atlantic to the Canary Islands, it is not excessively high. What exists, he continues, is the feeling that there is constantly a “war” on the European borders due to what he calls “moments of panic”, such as what happened recently in Lampedusa and last winter in the Canary Islands. “The danger is that these facts are taken advantage of by the extreme right, which insists that there is a permanent war on our external borders”, illustrates the expert to give the example of the success of the xenophobic speech of Marine Le Pen, in France; and by Matteo Salvini and Giorgia Meloni, in Italy.

Of all the migratory routes to the EU whose flows are increasing, the border between Greece and Turkey now represents an exception. Despite the good weather that usually prevails in this area where a few kilometers separate two different realities such as the European Union and the Middle East, arrivals to Greece from Turkish territory have fallen by 58% so far this year, according to Frontex . In the first four months of 2021, the border agency has identified only 4,828 illegal crossings by people seeking refuge on community soil. Knaus admits that it is surprisingly little.

However, the NGO Aegean Boat Report, which weekly documents returns at the border on this eastern border of the EU, assures that between May 10 and 16, 11 boats with 273 people on board began their journey from Turkey to the islands. greeks from the Aegean Sea. Of these, 10 boats were forcibly returned and only 28 people managed to reach Greece aboard a single boat. Although the figures have nothing to do with the dramatic period between 2014 and 2017, they do show an upward trend, since the previous week not a single boat arrived on the Greek shores.

“The explanation [al descenso de llegadas] it is part of the return policy that the Greek police have decided to undertake ”, assures Knaus. These returns on the high seas have been documented by various NGOs and the Turkish Interior Ministry, which publishes the returns of migrants to its territory every day. The scandal has even reached the European Parliament, which at the beginning of the year opened a commission of inquiry to determine the degree of responsibility of Frontex in all this matter and whose final report will be released at the beginning of summer. “Since 2016, Frontex has a clear mandate for returns, but it does so in collaboration with the Member States. The agency does not decide the policies of the countries ”, Gkliati defends on the phone. For Prestiani, however, the organization led by Frenchman Fabrice Leggeri “was aware” of some returns that violated the fundamental rights of migrants. Knaus insists, notably outraged on the other end of the phone, that it is no secret: “Greece returns migrants to Turkey, Croatia to Bosnia and Hungary to Serbia.”

The founder of ESI summarizes the functioning of the flows to the EU in the paradox that the Twenty-seven face, although in a much more dramatic way, the countries of the south, in the face of migration management. According to him, when democracies respect international conventions and laws, the illegal crossings of migrants at the borders increase because there are third countries – such as Morocco, Turkey or Russia – that “blackmail” with an opening of borders.. Al end is a something for something, as Prestiani says: “Third countries open and close their doors [hacia la UE] depending on how their negotiations go (…) The EU’s risk of being blackmailed is very great and dominates everything ”.

But if Member States start to skip de facto the laws resorting to “brutality”, As with the returns in Greece (about 10,000 in 2020) or in Libya (20,000 in all of 2020), those third countries no longer have room for blackmail in a negotiation and, therefore, the migratory flow decreases. “Nobody cares about breaking the rules anymore,” Knaus laments.

Arrivals to Spain via the two traditional routes, the Strait of Gibraltar and the Canary Islands, are clearly increasing. The Canary Islands have experienced great migratory pressure this winter with the arrival of cayucos almost daily and with thousands of people from sub-Saharan Africa stationed for days at the Arguineguín dock (Las Palmas de Gran Canaria). In 2020, the archipelago reached its all-time high of 22,600 registered arrivals, according to the agency. And the flow continues to skyrocket: only so far in 2021, arrivals to the Spanish archipelago have doubled with 4,500 irregular entries, mostly of Malian and Moroccan nationals. This upward trend began in the middle of the pandemic, which for Gerald Knaus, an expert in the European Stability Initiative (ESI), reinforces the theory that it was not only the virus that slowed the flow of arrivals, but the deterrent and return policies -the so-called ‘pushbacks’- of the Greek coast guards (in the Eastern Mediterranean) and Libyans (on the Central route) and their potential replication in the Western Mediterranean.

It is precisely from Morocco that some 10,000 people crossed irregularly and almost simultaneously to neighboring Ceuta on Monday. But without counting these data, this route had not undergone major changes compared to 2020. Only a 5% increase with 3,167 irregularly detected entries, especially from Algerians, Moroccans and Malians. “What happened in Ceuta has nothing to do with a migration crisis. It is a diplomatic crisis ”, sentence Knaus.